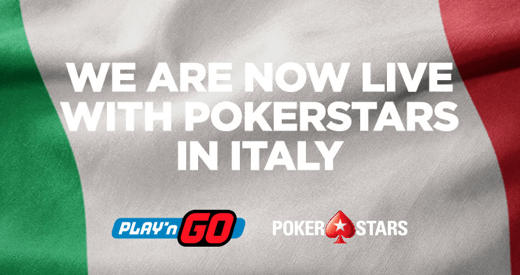 Play’n GO Team Up with PokerStars

After the extremely successful cooperation with PokerStars over the previous months, the Play’n GO brand is now ready to team up with this company on the Italy-based market.

They will be offering a full-fledged collection of their gaming products to their customer base across Italy, which completely fits into their plans to establish future partnership. Their gaming collections have recently been expanded with new slot offerings across controlled markets. At this stage, the company is going to move on to the Italy-based region later this year.

Play’n GO developers are already a widely recognized brand on the Italy-based market and they have had especially powerful performance over the previous years, which even resulted in them getting an annual award as the best casino game provider on the market. They are also scheduled to be nominated for two other honorable awards at the special event that will take place later this year.

PokerStars is owned by the Stars Group and has a powerful presence on the Italian market remaining a wide-scale provider operating in this district. This is one more reason why this year has been especially productive for Play’n GO developers, so we will all just be watchful as for what to anticipate later on.