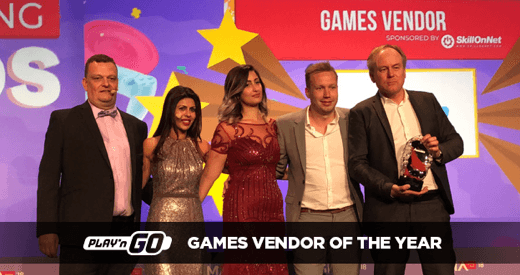 November 29th appeared to be a great day for Play’n GO, because the company was recognized as worthy of pulling a new title into its collection of achievements. The Malta Gaming Awards have selected this giant in the field as a Games Vendor of the Year.

It is this award that is considered the most revered in the gambling industry, being organized on the eve of another significant iGaming event – SiGMA.

The recognition became the embodiment of a laborious and busy year for Play’n GO, because the company managed to release a number of high-profile games, including also the outstanding online slots Sweet Alchemy and House of Doom.

Magnus Olsson, Head of Sales and Account Management, this year was honored to receive the award on behalf of the company, being present during the award ceremony at the Maltese Fair and Conference Center.

2018 has already turned out to be incredibly productive for Play’n GO, but it was this award that surpassed all expectations and gave the company a new big name in the field of online gambling.

This victory also opened the door to SiGMA for Play’n GO, where they are now promised a special stand capable of perfectly representing one of the largest companies in the industry.

The CEO of Play’n GO, Johan Törnqvist, also shared positive emotions regarding the brilliant victory. He claimed his being proud of receiving such a significant award and, together with his team, is determined to continue the development of the company, providing only the newest, the most unusual and the most impressive games. In addition, Johan Törnqvist is confident that the reward was received by right, considering that many goals have already been achieved.

The win at the Malta Gaming Awards clearly shows that all the efforts that have been made in creating the game content of Play’n GO have been justified. Well, we are waiting for new masterpieces!