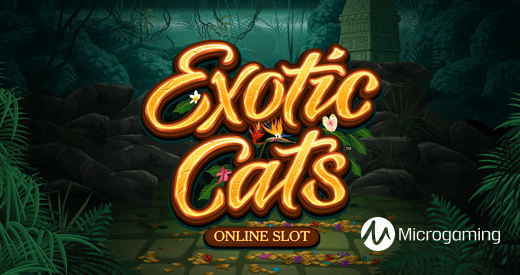 Microgaming now offers an entire plethora of truly wild prizes and lots of incredible rewards in its brand-new slot adventure – Exotic Cats. Long-hidden treasures await every lucky winner in the dangerous and mystery-filled jungle forests as a part of the Exotic Cats’ gameplay, which implies the use of 5(3) reels and has a total of 243 variable ways to hit huge wins. It is also fully packed with wild tokens and a bunch of magnificent creatures that accompany players on their journey towards big monetary gains. There would be several reel guardians, such as lion, leopard and a few other wild beasts that serve as primary tokens in this most recent and most fascinating video slot from Microgaming.

The maximum strength and power of dangerous beasts becomes evident through the use of special symbols known as vertical wilds. They can be come across while playing the elementary rounds and in the course of the extra spins regime. This option can be validated in case the user arrives at an exotic cat-shaped icon present on the reel that is supposed to be guarded by the respective species of wild cats. There will be the ferocious lion, striped tiger and the black-colored panther on the first three reels accordingly and a pair of other beasty creatures on the two remaining reels.

Once the cat-styled token arrives at the respective reel, the big and wild beast serving as its guardian is going to come up and make the whole reel go wild, which will allow forming different reward-driven mixtures of symbols so as to get hold of immense monetary prizes. Additional spins opportunity can be unraveled in case you arrive at least three and up to five scattered icons throughout the first-level game, while the acquisition of three or even more of such icons in the process of playing the bonus game is going to make extra five free spins availed at your disposal, so that you will get all chances to hit even greater prizes!

Exotic Cats was introduced to the fans of web-based adventures on 8 August, 2018. According to the gaming-associated publisher behind Microgaming, the vertical wilds are suggested to grant players a big chance to get hold of splendid rewards in the course of the gameplay, where a total of five reels can be transferred into wilds by the major cat-styled characters with just one little swipe. Exotic Cats game offers a minimal bet of 0.15 credits and allows winning up to 106,000 credits in total, which makes it an ideal option for the first-time players and professional users alike.