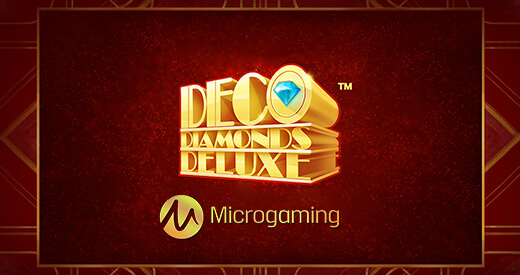 Who says classic is obsolete? Microgaming does not agree with this statement and in protest releases a new version of the acclaimed slot, calling it Deco Diamonds Deluxe. The game, in turn, was developed by Just For The Win.

Taking as its goal to return the user to the brilliant era of the 20s, Deco Diamonds Deluxe is staggering with the number of diamonds, sparkling symbols, reels, volatility and jewelry; 5 reels and 9 lines make the path to victory even more exciting.

Rewards can be obtained in various ways, and one of them has a wild symbol that can activate both re-spin and the bonus wheel. Two or three of the same symbols are fixed in place, and the remaining reels rotate to make a win even more.

Deco Diamonds Deluxe, the main symbol of the game, can also be shifted by selecting the Just For The Boost function. It also makes the evening even more mysterious, doubling the bid.

Thus, if a wild symbol lands outside the edge of a 5×3 grid, the function shifts the field by one position and thereby makes the gain even more likely.

Another highlight of the game is a three-level bonus wheel, which is launched by landing three, four or five characters of Diamond Diamond Deluxe.

Each of the three wheel levels (Silver, Gold or Diamond) has increasing winnings. Thus, the third level of Diamond makes it possible to get 1000 times the initial bet.

So the slot Deco Diamonds Deluxe is now available exclusively for Microgaming operators and lovers of 20x.