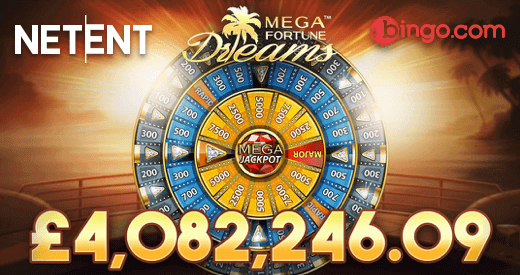 It can look like a miracle, but a forty-nine-year-old British player has won more than a four-million prize with the help of an online-casino bet. The won has landed right in the middle of October during a standard session of Mega Fortune Dreams by NetEnt. The user has become a lucky one, playing the game on Bingo.com.

Mega Fortune Dreams has showed once again that dreams do come true. This time, such an enormous prize was won by simply playing such a beloved game, which became life changing for the man. There are thousands of stories about people who win money online, but not always you can prove the truth and value of it on your own example. Nevertheless, this particular story shows that anything can happen in the world of online gaming, even multi-million prizes are real.

As the winner says, he just went to bed after a long day at work, but couldn’t sleep. Because of that, he decided to have a couple of gaming sessions on the PC. He even didn’t realize at first that he has won a couple of millions. He just thought that this was a typical winning of a couple of euros. And then the message that showed the amount of his prize came out. Since then, the life of the British player has changed forever. The fabulous won allowed Henrik to retire from work as well as buy a couple of cars. Now the lucky winner is going to Disneyland to have a vacation with family and friends.