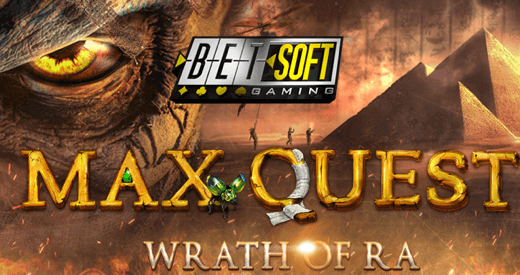 It’s time for Betsoft Gaming to create a perfect example of how far online slots have come. Not surprisingly, with the power of Max Quest: Wrath of Ra, it is easy to show that nowadays, anything is possible in terms of great casino games.

Max Quest is the game that is focused on ancient mysteries of Egypt. It’s up to the player to decide which path to take in order to find a greater fortune. But one thing is certain – in this project, the user will have to join the bandit’s gang in order to find treasures of ancient pyramids and palaces. However, you should not forget that all the treasures are well-secured with huge monsters and curses. Therefore, it is important to have an ability to fight back, whenever it will be needed.

By playing this project, the gamer will become a part of the Brock Ryder band that is trying to discover ancient gold. In order to protect themselves, the bandits are using a big selection of weapons. Besides, it is worth to mention that this project is multiplayer based, which means that six gamers can enjoy some good matches all at the same time. It’s an entirely new way to play online slots, as there are no traditional reels and symbols in the game. It’s more like an interactive shooter. Instead of spinning the reel and trying to collect matching items, the player will have to use special weapons and kill tons of enemies, including bosses on each level. So users should be prepared that it is going to be not that easy, as it may look at first.

It’s a revolutionized way of combining home console experience of playing the game with classic slots formula. So it’s fair to say that Max Quest has revolutionized the way people are going to enjoy web-based projects. The project offers a lot of built-in social gaming elements. The player can also earn “XP” (experience points) in order to get rewards at the end of each level.

Before the launch at the beginning of November, the game has got a great attention from all types of gamers. The trailer to the product has got more than four million of views, which is phenomenal. Nevertheless, it’s not shocking, considering how big-budget the game is. It is worth mentioning that Betsoft Company invested a lot of money, just to make sure that Max Quest: Wrath of Ra will be created by joint efforts of the best artists, designers and programmers on the market. As a result – the game offers a great gaming process and social features, a great story with nice characters as well as an interesting system of quests. Just like in case of all other projects of the company, it is safe to say that Max Quest: Wrath of Ra will work perfect on both personal computers, mobile phones and tablets.