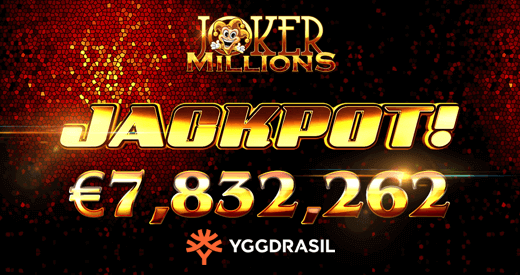 A Swedish gamer is celebrating a glorious won of more than seven million euros as an extraordinary prize on Yggdrasil’s game called Joker Millions. With the help of another gaming session, the lucky man is now eager to allow himself everything he wanted for the last couple of years.

This event took place on Friday’s evening. An ordinary Swedish gamer just wanted to play a game or two on LeoVegas. In order to do that, he opened the website with the help of a smartphone. After making a simple bet of fifty cents, the gambler has won the biggest jackpot in the mobile version of the Joker Millions project.

It’s a record breaking jackpot and the largest prize that has ever been paid in Joker Millions game. As the CEO of Yggdrasil claims, they are thrilled to see a gamer who have changed his life with the help of a single spin in their game. This year, Christmas has begun earlier for this particular player. Besides, it’s one of the two global progressive jackpot games by the company and they are interested in making some valuable changes to the game in order to make it even better with future updates. So maybe in the next couple of months we will hear about new millionaires.