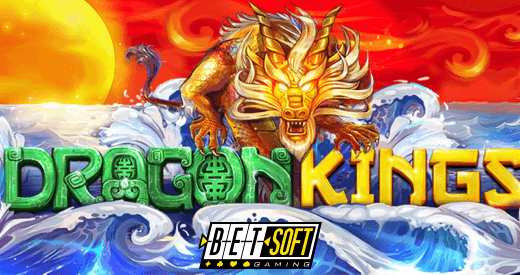 Another Reality with DRAGON KINGS

Embrace the strength of four waters in Dragon Kings, the innovatively designed, user-oriented video adventure from a reputable producer – Betsoft Gaming. A game with a distinct appeal around it, Dragon Kings revitalizes the inherent Chinese mythology using lively and aesthetically pleasing Asia-styled sound effects as well as a whole variety of special extra offerings for the delight of users.

From lucrative jackpots to an abundance of free spins, the key to Dragon King’s exclusive range of features lies under the visible surface, in the dark and shadowy places where dragons reign. The story goes that the seas around the territory of China – four waters spreading to the north, east, west and south – used to be governed by dragonish spirits, whose predispositions could change the way those waters flow. The individuals who went out travelling into the sea usually asked the dragonish spirits to allow them to cross the waters safely, and they also called for their power whenever the situation went out of control. The Dragon Kings slot is filled with frightening spirits that serve as the symbols inside the gameplay and possess the capacity to shape the way the game process is running.

The whole bunch of dragons is comprised of wild beasts, which allow replacing any other non-dragonish icon in store. Each of these tokens has their own exceptional powers. On the reel 1, you may find the Azure Dragon, which possesses the capacity to lock out the rest of dragons whenever he emerges on the reel as well as grants one free spin to players. As for the reel 2, here you will find the White Dragon, which can easily repeat itself to create a whole variety of wild tokens. Reel 4 is occupied by the Red Dragon, which may instantaneously grant some prize at random from its wide choice of rewards. It also has a potential to maximize the bets of players 400 times. As for the last fifth reel, here you will find a Black Dragon, which is meant to expand your win line that features this dragon by a total of 3 times.

The legend also embraces a story about the fifth dragon, whose extraordinary abilities are so strong that he reigns even over the defenders of the local waters. In the game, the Dragon King is presented as a glorious creature – a golden-colored tall animated beast that seats over the central reel and increases the winnings from bet lines twice as well as regulates the user’s way ahead towards immeasurable jackpots. As soon as the King emerges together with one or even more of the other dragon creatures, their powers are united so that they can increase the overall bet of players by a mind-blowing sum of two thousand credits. Among others, they also add the sixth reel into the proceedings, which is a one-symbol reel that serves as a special sacred place where the Magical Pearl belonging to the ruling dragon remains hidden.

The Magical Pearl is presented as a brightly shining pearl that is grasped by the King’s golden-colored claw. It represents the last piece in this puzzle, which is necessary for opening the gateway to one progressive jackpot on offer. There are four of them in total – bronze, gold, silver and diamond. The unity of one dragon with the King and his Pearl are suggested to be capable of triggering the bronze jackpot on offer. At the same time, all dragons coupled with the King and his Pearl will trigger the sea-modifying feature and grant the diamond jackpot to users. The Magical Pearl itself represents the major feature that is capable of unraveling the huge reserves of extra special features, such as spins provided free of charge, which can increase the winnings twice, and the total number of spins amounts to fifty spins at a maximum.

The head of the manufacturing department of Betsoft, Dan Cooper admitted that their ultimate goal was to revitalize the China-styled legend and make it come to life in a totally innovative manner with the use of high-end properties and a mixture of artistic features and sound effects that would be appealing to the preferences and tastes of modern-day Asian and global casino-loving public. From the dragonish characters possessing strong powers and incredible capacities to the mind-blowing jackpots, the producers of the game believe that it represents the best sample of an innovative slot machine according to its design, aesthetic appeal, plot, audio and visual effects as well as a fascinating range of properties on offer.

Dragon Kings is compatible with multiple devices being grounded on the company’s inherent SHIFT platform. It is especially designed to decrease the sizes of files and the pace at which the data is loaded. It also provides innovative audio and visual effects. The platform on which the system is based ensures that all players can enjoy the same level of incredible game process no matter which platform they are using. Dragon Kings is also the primary product of the Betsoft Company that is grounded on equivalent jackpot models, while the bigger-sized bets ensure higher probability of getting a prize. Try out the almightiness of real dragons together with this new release that was launched in July this year.

Betsoft Corporation is engaged in the production of innovatively designed slot machines for laptops and mobile devices. It embraces a little less than 200 titles, which can be tried out by players owing the partnership of the company with multiple leading iGaming operators across the entire segment. Betsoft is enhancing the players’ expeirnece by producing realistic three-dimensional slots that guarantee rapid-speed gameplay and sound perfection apart from the visual splendor that is typical for film products and video adventures.

Betsoft produced the new ToGo collection back in 2012 when it first entered the market. As of recently, it has developed the SHIFT platform, which allows supporting cross-platform innovation and increasing the gaming products’ performance. Casino Manager is one more platform empowered by the brand that ensures premium-quality management, marketing and administration through one unified package.

The company is located in Malta and has extra licensed headquarters in Curacao. You may get more information by visiting the official site of the company or contacting their support team.