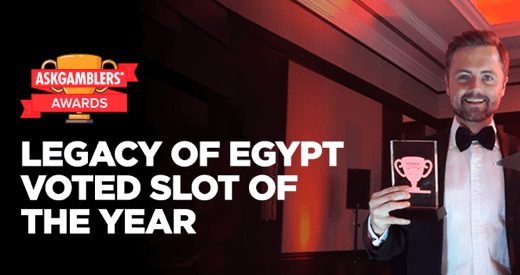 Needless to say, gamblers are able to make perfect choices, and this time the honor went to Play’n GO! This way, the worldwide leading slot model developer received the Slot of the Year award. So the company was honored for its outstanding Legacy of Egypt hit, which was granted at the AskGamblers Awards ceremony last night.

Well, it is also worth noting the uniqueness of the AskGamblers award, because the slot in this nomination was voted by those people who play the game, unlike in other ratings, where the opinion of industry professionals plays the main role. Thus, the last 12 months have made it clear that the Legacy of Egypt has become a favorite and truly recognized slot model among people being passionate about gambling.

Besides, gaming model specialists were twice nominated in the category, offering also another ultimate slot, Sweet Alchemy. All this time, the company representatives were in the premises of the Hyatt Regency Hotel in Belgrade in Serbia, where the award ceremony was held, after which they proudly took their prize.

The victory in the nomination shows a huge superiority of Play’n GO, significantly strengthening their position in the global market. Thus, it is even needless to say that the portfolio of slots provided by the world-famous company remains impressive year by year for its quality and diversity.

The CEO of Play’n GO, Johan Törnqvist, not restraining himself in emotions from such a significant victory, hurried to thank all the fans. He also added that for the company it is a great honor to receive a prize and recognition, because it shows in the best possible way that all efforts to create the most interesting and innovative content for players have never been in vain. Mr. Törnqvist is sure that the Slot of the Year nomination, where the choice is determined by the people to whom the company has been devoted, shows that Play’n GO is moving in the right direction, and the new 2019 will not be an exception.