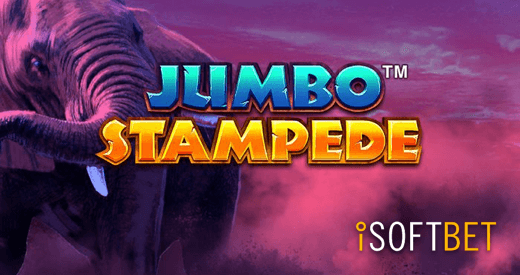 As a leading provider of digital casino software, iSoftBet recently opened for the world its new offering, Jumbo Stampede. The epic journey across the African plains emerged in a wider market after a successful period of exclusivity with GVC.

Being a 4×6 slot with 4096 payment methods, Jumbo Stampede can be considered the latest addition to the high-performance set from iSoftBet. The slot has received certificates for all regulated gambling markets. Thus, not only traditional game icons, including a scatter, but also the famous inhabitants of the desert, including tigers, gazelles, rhinos and other wild animals, are depicted on the reels of the game.

Scatter in turn in the game can bring the client 8-50 FS, depending on its quantity on the reels. Jumbo Stampede also introduces a wild symbol. Thus, the setting sun replaces any symbols, thus forming the most advantageous winning combinations. Thus, it is worth noting that FS rounds make it possible to get winning combinations for giant symbols in the form of a ferocious elephant, even on non-adjacent drums, while wild symbols undergo transformation to create even more winning combos.

Michael Probert, the iSoftBet Commercial Director, noted that the manufacturers is pleased to provide the extremely popular Jumbo Stampede with the GVC to the general public after the expiration of its successful period of exclusivity. He also said that the exciting bonus features and incomparable game template will definitely win for Jumbo Stampede popularity among players of all levels and make the slot one of the most recognizable models from the company today.