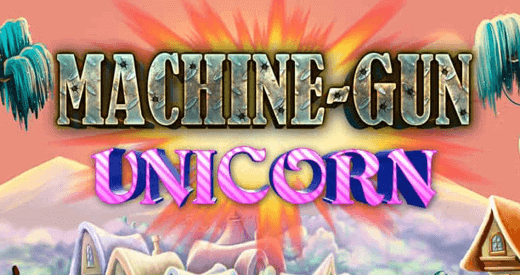 Have Fun with Machine-Gun Unicorn

What is the best way to celebrate Halloween? That’s right – to play some extraordinary slots that are themed specifically for this holiday!

Now, it’s going to be even funnier, with the help of the game that is going to represent zombie apocalypse in a different, never before seen, way. During the playthrough, you are to get acquainted with an epic hero that’s going to inspire you and will give you a decent feeling of something greater than just a game. By the way, why not to see unicorns. Who doesn’t love them?

This great project is called Machine Gun Unicorn. It is a five-reel gambling slot with ten paying lines that is going to change the genre of zombie battles forever. We can bet that you have never seen anything like that before.

You will battle tons of zombies with the power of cute little unicorns that are going to smash zombies’ heads. The unicorns are going to be beautifully scary with all those axes and bats between their teeth. It will be needed to get some extra items in the process of the bloody battle to make sure that no zombie is going to stay alive.

There is also one special recruit on the unicorn side that can carry the machine gun. This golden unicorn is to participate in the battle to perfectly end it with some great special effects.

It is possibly the best way to celebrate Halloween. Where else can you find the project of Microgaming that is inspired by both classic zombie movies and stories about mythical unicorns? It is the best product on the market for this season.

Thanks to the developers, it is possible to get armed and battle tons of zombies funnier than ever before. So, if you have ever looked for a good game to celebrate Halloween, there are going to be no better way to do that than by playing Machine Gun Unicorn.