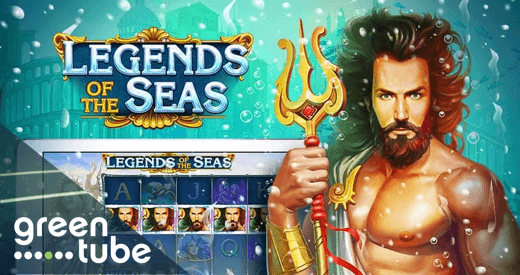 Greentube’s Release is On Offer

Greentube once again encourages online gamblers to set on a journey to the bottom of the ocean together with its all-new gaming release – Legends of the Seas, which is now easily accessible for all B2B affiliates!

Neptune is known to be the ancient mythological ruler of the waters, a conqueror of the almighty Titans who has a unique capacity to govern and take control over the mystery-filled water beasts that have numerous magical powers. This mythological character has turned into the most important hero of the all-new slot by Greentube fully accessible to the affiliates of B2B. Just set on a fascinating journey together with the Legends of the Sea slot that is fully packed with a total of 40 unchangeable win lines and an ordinary number of reels.

In case Neptune shows his mercy towards you while you are hunting for treasures in his fabulous world beneath the water, you will get a chance to obtain numerous high-paying rewards onto your casino-oriented balance. Your major task is to help the god of seas himself to find his lost love, the Mermaid, and the successful completion of this task is going to result in multiple additional rewards for the sake of making you a wealthy man. You are going to be awarded with free spins and multiple other fabulous features that are on offer in this game.

The major goal in the Legends of the Seas slot is to gather a total of 5 identical icons on one of the paylines. At the same time, there are diverse extra symbols, such as the wild one, which is going to help you replace the rest of tokens, but not the scattered ones. The latter take shape of Neptune himself as well as his beloved and a couple of both. The primary icon is obviously the ruler of the ocean in person, but this symbol is going to emerge only on the second reel as a part of the elementary gameplay. This character, however, is also capable of stretching across several other positions above the reel and covering them all up.

The Mermaid, on the other hand, represents the second scattered icon, which can emerge on the third reel and can also be located on a total of three positions on the designated reel, but this entirely depends on where she is going to arrive at. You may get a chance to participate in 10 gaming rounds free of charge if both of the two primary scattered tokens emerge on the designated reels. In the course of these rounds, the combined symbol of both characters, which is the final icon of this kind, could just as well emerge on the reel and occupy the entire scope of positions on the designated third reel where it is supposed to be placed. As soon as this occurs, you are going to be granted two additional spins availed for free.