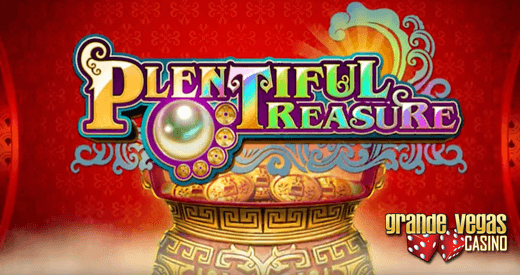 With the brand-new Plentiful Treasure slot becoming part of the Grande Vegas casinos’ library, the very concept “treasure” has acquired a much deeper value than just a stack of trinkets or some cash. The idea behind wealth and prosperity is an inseparable component of Asian tradition and the new online adventure Plentiful Treasure designed by RTG features many components that could be linked to happiness, good fortune and wealth. First of all, it is the color red, which is used in the thematic representation of this slot including the coloring of each and every symbol over the reels. According to Chinese culture, red incorporates power and it is even believed by the Chinese that red color can bring about prosperity and wealth. It is also connected with regal traditions and allows protecting oneself from bad luck. The background of this game is completely red-colored, which allows getting ready for a fascinating journey towards immense treasures hidden in Asian lands.

Plentiful Treasure has 5*3 reels and is distinguished by awe-inspiring visuals and truly oriental sounds at the background. It was developed by RTG, which is known to be a trusted provider having immense knowledge of Asian designs and graphics. Their new creation is packed with the attributes of Chinese culture linked to wealth and good fortune. The game is equipped with 243 different ways to win big and incorporates playing card icons and various amusing symbols like items of jewelry and much more.

Players of this slot can take full advantage of the special icon – Bao, which is literally translated as “treasure”. This icon emerges only on several reels and stands for all other tokens, but not the Pearl, which takes shape of a scattered symbol, but could also serve as a wild in certain circumstances. Pearl would emerge only on one of the reels and may substitute all symbols, but not the Bao and Tripod ones. The latter is a real scattered icon and in case you land at three of them, you’ll gain access to free rounds feature. The extra free rounds are supposed to eradicate all low-paying icons from the display, so that players will gain access to a total of eight freebies. Speaking of the Pearl icon, it is supposed to grant some increased payouts to players in case they land at rewarding combinations of icons. The multipliers are also present in this game. Some players may be wondering why there are eight freebies. In fact, this number is considered immeasurably lucky by the Chinese nation. It is a synonym of extreme success and two of them are even better, as it would count for even greater luck than can be imagined.

Be cautious in relation to the Bao icon as it may launch the Golden Coin feature. This specially designed option allows players to collect a bunch of golden coins. Every touch on one of such coins would make it possible to reveal the icon that will stand for one of the four jackpots on offer. If the gambler matches three symbols of the same value, they are supposed to hit a jackpot! There are a maximum of four jackpot prizes here. The value of these payouts starts from 50 dollars and reaches a humongous sum of 5,000 dollars as a maximum winning. With every new wager, the value of a jackpot will grow progressively!

No matter whether you wish to play this game from a mobile appliance or a desktop one, Grande Vegas gives players endless opportunities and makes the gaming process equally satisfying and entertaining. All you have to do is to wait until the start of November, when the Plentiful Treasure slot is going to be launched to the public, so that all registered gamblers will gain access to the unlimited possibilities provided by this Asia-styled game to everyone who is hunting for immense treasures.