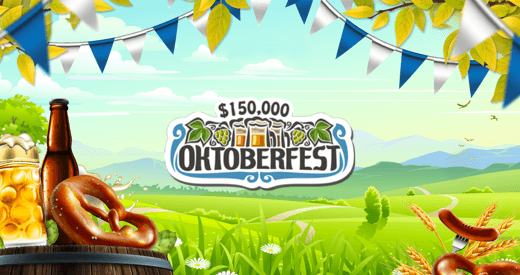 What can beer and bonus possibly have in common? In fact, this is exactly what the Intertops Casino offers to gamblers for the next Oktoberfest celebrations. Get into a fascinating hunt for 150,000$-worth bonus accessible to all participants. But only after you’ve had a few beer drinks, of course! It is all pretty much officially announced. While the summertime is coming to its end and some of us might get depressed about the approaching autumn, but there is one inspiring event that is going to take place in the close perspective – Oktoberfest is getting nearer! There can be nothing better than a mug of beer and pretzel to make you feel a lot more joyful! For many people, September is associated with children getting back to school premises and probably with parents getting back to their regular job schedules, but this, however, does not imply that you will be too busy to grab a fabulous bonus before the winter arrives. Keep track of what the Intertops Casino is posting in their blog and you will get to know the most prominent facts about Oktoberfest, while at the same time will get a chance to get hold of 150,000 dollars in the form of casino bonuses! Get ready for much fun!

In 2018, Oktoberfest festivities are scheduled to take place between September 22 and October 7 in Munich, Germany. The history of this holiday dates back to 1810! Initially, it used to be a regal affair. The King Ludwig I tied up with the Princess Therese on October 12, so all residents of Munich were welcomed to take part in the royal celebration. The major event at that time was horse racing, while the agriculture-related proceedings were introduced later on as one of the ways to improve the Bavarian economy. Further on, at the end of the 19th century when the insignificant beer celebrations turned into grandeur events, the Oktoberfest started to be celebrated the way it is done now! Indeed, too many people say that no one would ever outperform Germans in the quality of beer they produce!

Provided that the festivities were originated in the Bavarian district, at the modern-day Oktoberfest in Munich it is actually possible to taste the real Bavaria-born beer. Evidently, Germans are trying to keep up with the deeply rooted traditions. There are three elementary components in this fabulous drink – water, hops and barley, and this is all you need to produce a well-crafted beer beverage. One more amusing fact is that the Adidas trademark even launched a limited edition of specially designed anti-vomit sneakers for the mega event that took place in Germany the previous year. But before you head out looking for some of these, we need to disappoint you by saying that they have all been sold out soon enough!

One beer beverage at the Oktoberfest celebrations costs around 11 dollars, so everyone is recommended to bring their own beverages in the early morning, especially if you travel from abroad.

You might have the beer and the pretzel, but Intertops Casino has much more than that for you – bonuses! Every week in the course of promotional events, it is possible to get eligible for leaderboard (and therefore, get a monetary prize) by only placing a deposit of around 75$ or above (which can be done virtually every week indeed). In order to grab your bonus, you’ll have to gather some scores – a hundred dollars spent will allow you to grab one score! At the start of the week, the leaderboard is going to be launched once again, giving many new possibilities to make huge attainments on your way to glory and success (it is all fair, mind you).

While you are enjoying your time playing some online slots, the Intertops Casino is going to reward three hundred slot spinners with their weekly leaderboard extra bonus, but only if players make it to the topmost 300 positions (at the same time, the positions from one to twenty will get 500 dollars in pure cash!). You might be wondering how much cash is going to be awarded to players every week. In fact, the total sum amounts to not less than 30,000 dollars in bonuses granted to players on a weekly basis.

If this is the first time you are interacting with this casino, we are happy to tell you that Intertops gaming provider has even more to anticipate than that. Apart from the huge sum of 30,000 dollars in weekly bonuses, they also give a chance to participate in Thursday Bonus Draw! In case you make a deposit of 25 dollars or above from Monday to Wednesday (and why would you refrain from this?!), you will be eligible for winning a cash draw, where a total of 50 players are going to be granted a Thursday bonus! This is definitely a nice addition to your beer time!

Finally, there will be one more thrilling reward granted to only one lucky winner. At the end of the Oktoberfest-related bonus festivities, the Intertops Casino is going to give out a thousand dollars prize in pure cash! The outcomes will be based on the number of scores given out during the leaderboard bonus week, so the top 20 players will be eligible to grab this much money according to the final draw. As such, you can not only have lots of fun drinking beer, but also enjoy some additional cash pocketed during the festivities.

Keep in mind that the incredible weekly propositions could also assist you to take the lead among the rest of players, so keep track of the e-mails and closely monitor the promotions page at the Intertops Casino’s website. In order to start out fascinating celebrations, use the voucher OKTOBERFEST2018 and get 75% or 300 dollars as a bonus coupled with 50 additional spins in a Popinata slot game. Get ready to overcome all obstacles on your way to glorious prosperity! Join the winners’ ranks now!