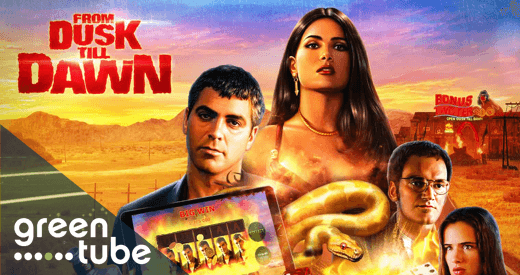 We here at SlotsSpots are making sure we deliver only fresh news from the gambling world to our audience timely and efficiently. Fans of one of the ever-popular iconic movies, From Dusk Till Dawn, will be happy to learn that it is now accessible in the form of an online game. The slot depicts the Gecko characters’ escape as well as a bunch of mind-blowing features as an addition to this action-driven adventure. You now have a chance to see the film’s renowned characters revitalize on five reels and fifty paylines availed in this slot. Will they live through the breath-taking night? Learn it in person with this new slot on casino-oriented market.

Basically, the major goal of players will be to stack five identical icons one by one in a row across the entire range of win lines. The minimal mixture of up to three identical tokens beginning from the left side is going to pay out some relatively moderate winnings. The wild token is meant to replace the rest of icons, but not the scattered one, in order to help you hit more winning mixtures and increase your chances for success.

There are also a number of fantastic bonuses in store. Thus, the Dancing Bonus is packed with a wild symbol that is going to replace the rest of icons or even modify their dimensions. You might also get a chance to use the Extra Stack Option, which features flames emerging on two particular reels. Each time they spring out in the game, these flames will transform into a reel fully packed with the identical icons. One more bonus feature is going to award lucky winners with several additional games availed for free. These are going to be played on 15 reels with the use of four icons. The upper-level icons will increase your winnings many times and you should also remember that there are five absolutely different prize-driven levels at a maximum.

This slot is also packed with small-scale games which can emerge randomly in the course of the gameplay. There is an escape bonus as well, which is going to appear after each spin during the main gameplay and it is supposed to transform into the wild icons. Another lucrative bonus is known as Everybody Be Cool, where all character-icons will transform into Seth tokens depicted on the reels.

Finally, the game is packed with an explosion option, which can be validated randomly when the utmost amount of winnings gathered surpasses or is equal to the size of your original bet. The explosion then occurs on the screen and signifies that your winnings have been multiplied five or twenty five times compared to your initial bet. On top of it all, there are two incredible jackpot winnings at stake, which can be triggered at absolutely any moment during the game.