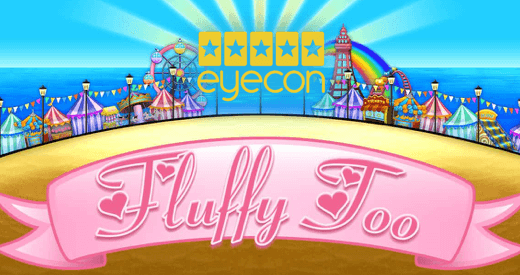 Couple of Releases from Eyecon

We here at SlotsSpot are trying to make everything possible to keep you updated on the latest news on the gaming-inspired market. When we say it is time to get furry, there could be absolutely different pictures springing out in your mind. You could be thinking of a kitten or some other furry creature out there. Or perhaps, you could recall all the cartoonish animal beings you’ve seen in your favorite films. On top of all that, however, when we are talking about getting furry, we always keep in mind all those ‘furry’ slot machines out there in the casino-based industry. Some of the most spectacular of them have been released by Eyecon Gaming Company. They depict not only furry characters, but also a bunch of fluffy ones hiding incredible prizes to be triggered by gambling experts. We are here to review the Fluffy Favorites and Fluffy Too slots by Eyecon Gaming producer.

Amiable animal beings can be encountered in web-based video slots every so often, but the fluffy and furry ones might be a bit more uncommon. Thanks to the new release by Eyecon Gaming – Fluffy Favorites, you are going to see a lot more of those. This is a five-reel slot with 25 win lines in total. It features a number of cute toy characters such as hippopotami, flying dragons, turtles and long-necked giraffes among others. These are going to award every lucky winner with a few seriously big prizes. In particular, there are five elephant-featured wild icons that are hiding 25 extra spins and add some more thrill to the game process.

There is another slot machine making the fluffy slot series even more charming. It is known as Fluffy Too. This one was released by the same company and inspired by the popularity of the previously released fluffy-slot. There is a similar range of features and almost identical variety of tokens, but the gameplay of this slot has been transported to another landscape. While its predecessor had a special toykit bonus feature (which is in many ways the same as the claw automats that never give out rewards in real-time setting), Fluffy Too is also equipped with a bonus, which adds an innovative yet classic touch to the proceedings.

It is definitely exciting to hit all those fluffy features in these slot adventures, which allows not only enjoying diverse bonus options, but also attending the sea-board entertainments that are readily available inside these fascinating games. The only difference is that in the end, you’ll get quite material cash rewards rather than a couple of pennies you might have hit during real-time sea-board activities.