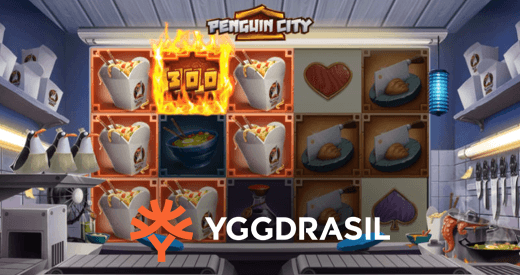 Let the penguins run free in order to grab a few weighty rewards in Yggdrasil’s innovatively designed game. An industry leader in terms of the provision of exclusive gaming content, Yggdrasil is now encouraging players to try out their new gambling product where you will have to release a few amiable penguins from the captivity of a malevolent governor through a number of adventures and challengers that are present in this joyful slot machine – Penguin City. This innovative casino-powered product welcomes players in the seducing universe of Penguin City, where the evil ruler wishes to keep his citizens in captivity.

The slot’s major peculiarity is a new regime known as Penguin Escape, which takes place whenever a wild token emerges on one of the reels in case you are lucky enough to make a reward-generating spin. This wild token stays up until the end of the Escape regime, which keeps unraveling its powers until you arrive at a spin signifying loss.

When inside the Escape regime, penguin characters are capable of awarding players with extra sticky wild symbols that appear on some of the reels. They also give a lucrative chance to get hold of a reward-driven symbol that might spring up on reel three. Users can also trigger the governor’s stacked wild symbol, which allows grabbing rewards on each spin up until the governor leaves his central place on the reels.

As soon as you validate the Penguin Escape Regime, characters will make it towards releasing themselves from captivity one by one, up until you hit the kind of spin that will exemplify your loss.

Yggdrasil’s Director of Slot Production, Jonas Strandman admitted that their new product offers incredible opportunities to users and developers alike, because it has marked the production of a truly joyful and innovative game that is equipped with exemplary features and offers a memorable experience to users. They had much fun while producing this slot, and they are sure that users of all levels of proficiency will be glad to hit innumerable prizes in this slot, while the atmosphere of the game ensures maximum relaxation and the characters are simply awesome. He admitted that their new product is oriented on regular users, because it is a low-variance slot, which nevertheless can grant you big-sized prizes, especially if you come across the sticky wild icons that pay really good.

Similarly to the rest of Yggdrasil’s games, Penguin City is especially designed to make the collection of gaming products complete. The company uses a variety of promotion-oriented tools such as the BOOST technology, which ensures better experience of users due to the presence of competitions, monetary racings and missions to be completed by casino fans. There is one more technology used by the company. It is known as BRAG and allows casino-loving experts to play games repeatedly and share huge wins through social networking platforms.

The slot is grounded on the HTML5 technology as well as other innovations, being compatible with both laptops and mobile devices.