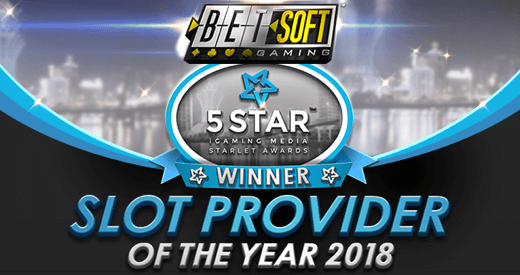 Improving the reputation of this iconic developer even further, Betsoft Gaming has recently been recognized as the most outstanding software producer at Starlet Awards event that took place this year.

The Starlet Awards is organized by 5 Star iGaming Media Company and is aimed at presenting the best of the B2B companies to the wide masses. This iconic event takes place every year and is focused on the innovative slot development, ethical approach to running business and overall success on the market. Based on these parameters, the absolute winner is selected by the unbiased judges.

The Starlet Awards of 2018 involved intense competition, particularly in relation to the gaming-oriented groups of honors, where a huge range of gaming providers competed for broader acknowledgement of their performance on the market. Such nominations as the Slot Producer of the Year were especially cluttered and Betsoft appeared to have surpassed over 15 industry leaders existing nowadays.

Even though Starlet Awards categories are kept in secrecy, Betsoft has made sure they show unsurpassable skill in terms of the delivery of top-notch video games of all times. Their most recently released products include Sugar Pop 2 and many others with all of them featuring different themes and offerings.

A new slot release from Betsoft is on the verge of being launched later this year. It is entitled Max Quest: Wrath of Ra and is expected to mark the new stage in the gaming segment development. It will certainly back up the stable reputation of the company across this sector.

The company’s director admitted that they are excited to have been called the Best Slot Producer of the Year judging from the savage competition that took place during the event. Their gaming collections have always been in high demand across the controllable markets in various districts of the globe and they are proud of being able to facilitate the productive gaming experience of users. They spent much time when developing their innovative technologies and looking for the best professionals in this segment. As such, they are now happy that their effort was rewarded by such an outstanding honor.

Betsoft Gaming is engaged in the production of innovatively designed games for laptops and portable appliances alike. Their collections of games bristle with around two hundred spectacular titles that are offered to gamblers with the help of leading casino operators of the world. Betsoft uses SLOTS3 innovation in order to ensure that the preferences of players are met with precision. They develop authentic 3D-powered slots offering superior gameplay complemented with splendid sound and visual effects the likes of which can be seen only in the iconic movie products.

Betsoft Gaming initially introduced its ToGo library in 2012. Not long ago, the company entered the Shift space which is aimed at supporting cross-platform interaction and shrinking the size of the necessary software to be installed.

As a reputable casino game developer Betsoft remains a leader in terms of management and promotion of its products availed to the public in the form of a unified package. Betsoft is currently based in Malta and has extra certification in Europe.