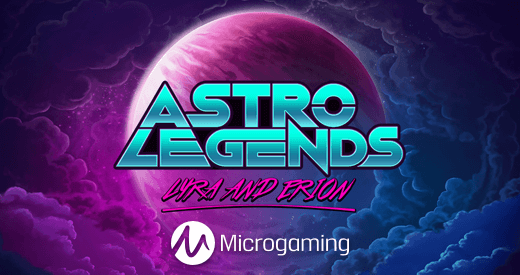 It’s now officially proved – Microgaming has just launched a new exclusive project called Astro Legends: Lyra and Erion. Foxium, the studio behind this massive title, has been developing it for months and now they are ready to present the product to the whole audience of players on the net.

Since the end of November, gamers have a chance of playing the new Astro Legends slot game that can easily make you feel among the stars while your inter-galactic tour. The release appeared great news, considering the product`s quality and stunning features. Moreover, Astro Legends is available for both PC players and mobile gamers.

In the center of action, there are two heroes – Lyra and Erion. They are visualized with the power of outstanding 3D graphics and high-quality animation, which creates never-before seen experience among hundreds of space-themed backgrounds. The exclusively made slot can really change the way iGaming industry exists right now. Even the soundtrack to the project was created exclusively, being inspired by old-school sci-fi movies, which means that it is going to be really funny to play and feel the atmosphere of this visually stunning slot.

The gameplay is someway classic, offering the story that makes the gambler focus on a gem-shaped reel that offers twenty-two crystal cells. All of them contain originally crafted symbols that should be earned in order to activate multiplier wilds, a high-stakes respins round, and a pick bonus game with highly profitable features.

Players can also get a great reword of 15000x multiplier after Sonic Respin activation. The feature can be randomly accessed after landing a couple of combinations on the reel. The slot also offers special symbols, like Wild Multipliers that gamers can also get as they appear randomly once in a while and can double the overall win.

In case of special Lyra Spirit Pick ‘Em bonus game, the gamer can evolve into the spirit form of the character. With the power of it, the user will have to run through levels full of danger, where it’s important to not fail while avoiding the hit by Erion. By completing this mini-game successfully, the lucky winner will get a twenty-time multiplier.