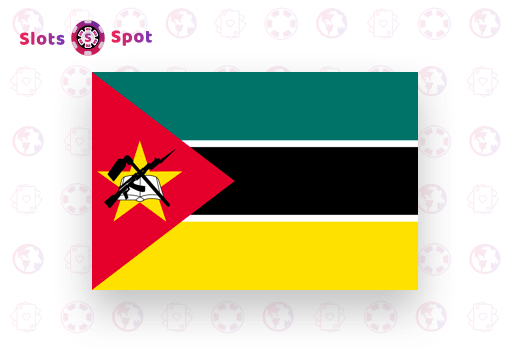 The country that we will talk about today is famous for its nature and is considered one of the richest countries on the continent. One of the lucrative industries in Mozambique is tourism. Nevertheless, not so many tourists visit Mozambique as the government would like. This is due to relatively strict laws and careful control of some areas of the life of local residents. Trying to attract as many foreigners as possible, the local government is trying to develop a gaming business in the country. Today in Mozambique you can find brick casinos, which are so loved by locals and tourists. Recently, online casinos have gained considerable popularity in Mozambique. Many local online casinos are very young, so you should be especially vigilant to make sure the reliability of the resource before the game.

History of Gambling in Mozambique

The history of the development of online casinos in Mozambique began 20 years after the country gained independence. In 1975, Mozambique became an independent state. Gambling certainly existed before this time. It was mainly lotto or horse racing, however, they were not legal in Mozambique. In the 90s, the government first began to consider gambling as a profitable industry. In 1994, the first law was passed that regulated the gaming business in the country.

The laws of 1994 regulated only land-based casinos and were very strict. Since the local government sought to develop tourism and increase profits from gambling, it was decided to amend the current legislation. By that time, online casinos were rapidly developing in Mozambique, which became popular in the world in the early 2000s. In 2010, the ruler of Mozambique declared the legality of online games and issued a law that regulated the activities of online gambling. The new law stated all requirements for online resources, including licensing. This event was long-awaited for many local players since from that moment they could play online gambling absolutely legally.

Thanks to the law on online gambling, players could feel protected, and the license allowed them to recognize reliable casinos that were approved by the government. In addition to the legalization of online casinos in 2010, amendments were made to the law on the regulation of brick gaming establishments. Now you could open a land-based casino with a budget of only $ 8 million. Since that time, casinos have ceased to be part of an expensive hotel and began to spread throughout the country. The Government of Mozambique continues to develop the gaming business with the goal of attracting tourists. In 2017, the distance between the casinos was reduced to 100 meters, while earlier this distance had to exceed 5 kilometres.

Types of Online Casino in Mozambique

The gaming business in Mozambique is growing rapidly. The government has created positive conditions not only for players but also for online casino providers. A variety of online platforms allows players to choose the most suitable type of casino for themselves. Online casinos are usually divided into mobile casinos, downloadable casinos and casinos in a browser.

Online casinos in the browser are considered the most popular among players. This is due to their availability and prevalence. Most online casinos offer players to gamble in a browser without additional downloads. Thanks to modern technology, such casinos are not inferior to downloadable games and give players unforgettable emotions. Before the game, be sure to check the security of the casino and update your plugin to the latest version.

In Mozambique, as in other countries of the world, the special popularity of portable devices. Modern man prefers everything to be at hand. The mobile casino is a unique opportunity to gamble wherever you are. Modern online casinos offer users of iOS and Android to download the casino application. If the player does not want to download the program, then he can use the mobile version of the site.

Providers of modern online casinos are trying to create an atmosphere as similar as possible to the atmosphere in brick gambling establishments. In Mauritania, the competition between virtual casinos is very large and this, in turn, encourages providers to constantly introduce interesting new products and upgrade. Games based on the plots of series, as well as games with virtual reality, are gaining popularity. Games in online casinos are most often divided into the following categories: card games, board games, and slot machines.

Board games are preferred by players with experience. The most popular board games include roulette, craps, and bingo. Most board games require players to have knowledge and skills. To win such games, most gamers learn strategies and use them in practice.

The most difficult gambling entertainments are card games. Nevertheless, a large number of players prefer them. Mozambique often hosts poker tournaments in which both amateur and professional players participate. Card games give players not only unforgettable emotions but also allow you to win large sums of money.

As we mentioned earlier in Mozambique, gambling with virtual reality is gaining considerable popularity. Live games allow players to visit a real gaming room without leaving home. The sound of cards being dealt with, a real dealer and communication with other players will make you forget that you play while sitting in your favourite chair.

The choice of games in the online casino of Mozambique is supplemented every day, and favourable conditions allow online casinos to develop rapidly.

Modern players are especially responsible for choosing a casino because they worry about their safety. Before you start playing online casinos you need to make sure that gambling is legal in Mozambique. Players will definitely be pleased by the fact that the country’s government not only has a positive attitude to the gaming business but also makes a lot of effort to develop this industry.

The activities of land-based and online casinos are regulated by the Law on Gambling. For the first time, this law was adopted by local authorities in 1994. But at that time, the activity of gaming establishments was put in a restrictive framework. The law, which was passed in 1994, regulated only brick casinos, while the gaming establishment was supposed to be part of an expensive 4-star hotel.

Later, in 2010, the Mozambique government decided to develop the gaming industry in order to attract tourists to the country. In the same year, President Armando Gebuza officially announced that online gambling was legal in Mozambique. In addition, the head of the country proposed a bill that changed the strict requirements for casinos and players to friendly ones.

The Gambling Act was passed in January 2010 by the Assembly of the Republic and is governed by the Guebuza Promulgates Casino Bill. With the adoption of the law, it became easier to get a local license, and this encouraged providers to open new gaming establishments. Since 2010, Mozambique has been considered a friendly country for gambling. This law also determined that the responsibility for the operation of land-based and online casinos rests with the Ministry of Tourism of Mozambique. In 2017, amendments were adopted to the law that reduced the allowable distance between land-based casinos to 100 meters.

In Mozambique, it is not forbidden to play in online casinos that have foreign licenses. Nevertheless, a state license is considered affordable and reliable. Before the game, you should definitely check the availability of such a license in an online casino to be sure that your rights are protected.

Players are allowed to gamble in Mozambique only if they are 18 years old.

When choosing an online casino, players should study a number of parameters, including the banking capabilities of the resource. This is very important, because you can only feel the real atmosphere of the casino by placing bets. You should also pay attention to how you can then withdraw your winnings from the casino. The fact that gambling in Mozambique is legal confirms that there will be no prohibitions on online payments. All popular payment methods, including bank transfers, are available to Mozambique players. Despite the fact that bank transfer is considered a very reliable method of payment, players use it quite rarely. Most likely this is due to the emergence of alternative payment systems that guarantee instant crediting of funds and anonymity. These payment methods include e-wallets, prepaid cards or bank cards.

Currently, the most popular method of replenishing a deposit is considered to be debit and credit cards Visa and MasterCard. Bankcards guarantee players instant money transfer and security. The world-famous payment systems such as Skrill, Neteller, Payeer are also popular among players. The advantage of this method of payment is not only security, speed of transfers, but also anonymity. Many players do not want to provide their bank details directly to the casino administration. In this case, payment gateways come to the rescue, which protects the gamer’s data and guarantee additional security.

Mozambique boasts a developed gaming industry. Local players visit not only domestic, but also foreign online casinos. Many online resources try to provide players with the most comfortable conditions for the game. Most foreign resources suggest choosing an interface in English, but there are also those casinos that will please local players with an interface in Portuguese (this is the official language in Mozambique). The same goes for the choice of currency. Absolutely all online casinos accept payments in international currency. Therefore, players from Mozambique can easily replenish a deposit in dollars or euros. Moreover, modern virtual casinos automatically convert currencies at the world rate, which greatly simplifies banking operations for players. Domestic providers certainly accept the national currency Metical.

Absolutely all players from time to time need professional advice. Newcomers and professional players can clarify questions about withdrawing winnings or replenishing a deposit, learn about the rules of the game or discuss the user agreement. In this regard, players pay attention to the availability of support services when choosing a casino. In turn, Mozambique online casinos care about their reputation and provide players with the opportunity to contact consultants in any way convenient for them, for example:

Whichever of the above methods the players from Mozambique choose, they will certainly receive professional advice and will be able to resolve all disputed issues.

Predictions About the Future of Online Gambling in Mozambique

Mozambique has recently seen significant economic growth. Nevertheless, the gambling industry still needs to develop in order to reach the same level as many other developed countries. The state government certainly understands the importance of gambling and is considering many strategies for the development of this industry. The first step was in 2017 when the allowable distance between the casinos was reduced to 100 meters. Now the government is considering another idea to open land-based casinos along the border.

Thus, local authorities want to attract residents of diligent territories. As for online casinos, this industry is also at a development stage. The legislation of the country has providers open new online casinos and develop their activities. Obtaining a License in Mozambique is also quite easy, while it is considered inexpensive and of high quality. Its quality is determined by fair casino requirements that protect the rights of players and guarantee their safety.

To be competitive, online casinos in Mozambique collaborate with the best software providers such as Microgaming, Rabcat Gambling and others. Games with virtual reality are also gaining popularity. Already, many local casinos offer this option for their players. In the near future, one should also expect the introduction of cryptocurrency in the online casino of Mozambique. This will not only simplify, but also further secure banking operations.

Our team believes in the successful future of online casinos in Mozambique and continues to monitor the development of the gaming business in this country.